jojo:
what do i like?
-the mix between old town, new development and very quiet beaches
-lots of elderly and young people out in the streets until well into the night, even on a monday.  most are locals that seem to be out for a stroll.  makes for a very nice atmosphere when since waterfront areas are typically very touristy
-meeting up with my buddy j-lo in corfu to join us for the next four weeks of exploring the coastline of southeastern europe.

what do i dislike?
-i’ve read that sarande is one of the more developed cities of albania but even so, it’s very rough around the edges.  there’s something so charming about that mix
-the downside of travelling with friends who are able to eat seafood… watching haha and j eat mussels and squid.  ugh.  torturous.
-the customs lineup as we disembarked the ferry from corfu.  it was pouring rain and we had to wait without cover in our shorts as the ground had a mini stream running on it.  the man in front of us had held up the customs officer so long that we eventually went back to the line we came from and we were the last people to leave.  water was streaming down our faces by this point and my bags had soaked through.  the winds continued to storm for the next 6 hours but then eventually the sun came out and

what do i like/dislike about the new accomodations?
-our hotel is very secluded and has its own private beach.  for being a small town (40,000 population), a hotel with a secluded beach feels really odd and cool at the same time.  what motivated us to visit albania in the first place was hearing that tourism in the country is just starting to warm up.  i have to say that i’m hooked.  my biggest fear is that i’ll want to travel to unknown countries for the rest of my life.  must. find. online. work. options. asap.  our room (well, half the 16 rooms in the hotel) has a waterfront view of our bay and cost us a whopping $50 cad per night for two people… and three beds (i know, i don’t understand either).  taxi rides to the city for three people cost 500 lek which is about $5 cad 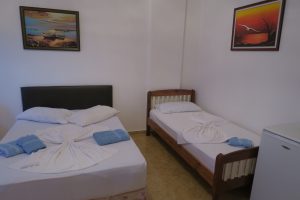 biggest adjustments from the previous stop?
-no people!  namely americans, koreans and the chinese.  actually, even the people are are staying at our hotel are albanian!
-realy enjoying the local feel.  shoulder season in a place that’s just getting its footing as an attraction to foreigners means lots of locals.

what was our first meal?
-pork chops on rice at the hotel.  nothing special, it was 600 lek (~$6 cad).  our first ‘meal’ was out in town on the water.  a trio of thin crust, wood oven pizzas at alfa pizzeria that sat off the main promenade.  500lek per pizza and a perfect vantage of the double (sorcery i tell you) sunset.

overall impressions?
-i’m really excited and looking forward to the next few weeks.  while croatia will be more built up, albania should be a fun introduction to the quieter side of europe where it’s main clientele is from the surrounding european countries.  i haven’t found a lot of ‘out of the ordinary’ local fare, which are veggies (stuffed peppers with rice & okra) and seafood (death incarnate) but we’ll make do.  food is cheap, accomodations are good value and the city photographs very well.

haha:
what do i like?
Love our hotel with its private beach and friendly staff. I think it’s still shoulder season so places here are not busy at all. Also can’t beat the cost of everything, nice to stay under budget for the next week or so.

what do i dislike?
On the day we arrived by ferry from Corfu, we were welcomed to lightning and thundershowers. We were drenched by the time we got to passport control which consisted of two kiosk “offices”. Basically we were lining up outside, in the pouring rain to get our immigration stamps.

what do i like/dislike about the new accomodations?
The hotel is outside of town and has its own private beach which is great. The downside is that we have to take taxi to/from centre of town but with the cost of ~$5 cdn split between 3 people, it’s not expensive at all. The staff here are so sweet. One of the staff (his name sounds like “bear-hart”) gave us his cellphone to watch a Eurocup football match. And in keeping with shitty bathroom drains, this one is terrible as well.

biggest adjustments from the previous stop?
Although tourism is taking off in Albania, it’s not quite as developed yet. I think jojo and I are a bit of a novelty as I do not see any other asians here.

what was our first meal?
I had the seafood pasta which had fresh local mussels.

overall impressions?
I really like Sarande so far. The city is still developing, lots of buildings being in the process of being built. The people are quite friendly, although they appear to be reserved and gruff at first. We are able to communicate fairly easily in English. I think this place will become more touristy in the future but for now, it’s still under the radar and definitely worth a visit.

the beaches of the albanian riviera