jojo:
what do i like?
-white buildings & blue seas – the pictures of this place don’t lie, it’s pretty impressive to look at
-beaches and crystal clear water – different from our previous stops.  stopped by two beaches, a ‘black’ (more like gray) sand and another made up of black pebbles.  waters are much warmer than the atlantic
-the fooood – it’s been a long time since i’ve had greek food and while i rarely crave it, i didn’t realize how much i missed it.  santorini has a few veggie dishes that are local specialities (white eggplant, tomato keftedes/balls/croquettes); all the fruits and veggies grown locally are so tasty and sweet with the hot climate
-sweating bullets – temperatures have been in the mid-high 20s so far.  loving that wardrobe options have gone back down to basically the same outfit everyday: boardshorts and one of my two tanktops

what do i dislike?
-mega touristy – international crowd up the wazoo and the town’s alleyways are lined with souvenir shops everywhere the eye can see.  we spent the first two days sitting on beaches to escape it as much as we could
-eating at anywhere with a view will run you about 100% more than being off the main drag.  i’ve heard of markups before but that’s crazy talk

what do i like/dislike about the new accomodations?
-pretty basic but it does the job.  we have a small reading nook and a balcony overlooking the water so that can’t ever be a bad thing.  shower difficulties seem to be constantly happening to us.  we’ve got a nice looking one except that it has no curtain, another one of those ‘great-for-website-pictures-impractical-to-use’ designs. 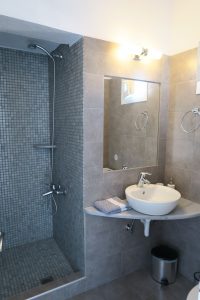 biggest adjustments from the previous stop?
-while we enjoyed all our meals in copenhagen, food-wise, the city was mostly offering up fare from other parts of the world.  open faced sandwiches (smorrebread) was one of their staples so it’s nice to be in the land of souvlaki, lamb (surprised to find it’s cooked more ways than just ‘roasted’)
-as if portugal wasn’t slow-paced enough, santorini is even smaller with the towns being made up of only 1-2 streets at the most.  there aren’t that many sights to see so hopefully we can get caught up with some blogging and sleep over the week

what was our first meal?
-waterfront dining.  souvlaki for haha and jp, a vodka a la penne for myself

overall impressions?
i can see why people who’ve visited santorini before continue to come back, the island is beautiful, relaxing and is the perfect way to wake up every morning.  going to try and slow it down a little this week try to get onto island pace.  in hindsight, a week might be too long to see all we want to see so we’ll probably add on some extra down days before we get back on the move.

Santorini is one of my must visit destinations so I’m very happy I’ve finally made it. It’s as in the postcards, whitewash houses with blue roofs, flowers blooming over ledges and gates, donkeys and of course, the famous sunsets. 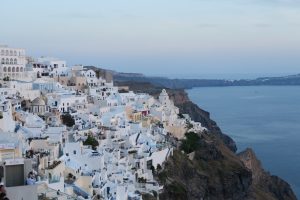 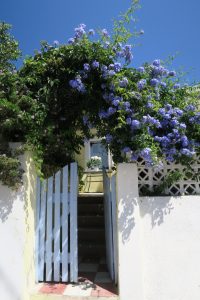 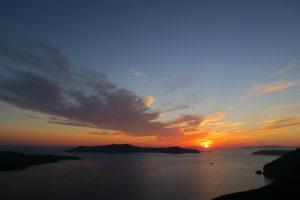 Very touristy. Lots of people trying to get you into their restaurants or rent an ATV from them. At Kamari beach, people kept coming up selling temporary tattoos, massages, random useless crap. A group of young Brits loudly tried to buy coke, not cola, the snort up your nose variety. So classy.

To keep costs down, we booked a hotel a little further away from Fira town centre. There is a bit of an uphill walk, enough incline to get the heart pumping a bit. Room is very basic, new and clean. The host gave us wine and cheese the first night and delicious watermelon the second night. 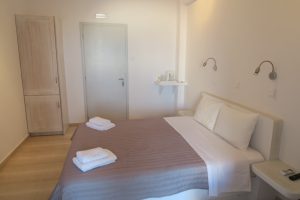 It’s all Greek to me. First year university I took an ancient Greek course, it was so hard, I barely passed. Years later, I don’t remember a thing and know maybe 10 letters of the Greek alphabet. Thankfully tourism is well developed here and most signs are in English.

I had a chicken souvlaki. It was okay, pretty expensive for one skewer of meat. But we were paying for the view mostly. I had wanted the moussaka but it was sold out (probably because it was the cheapest item on the menu). 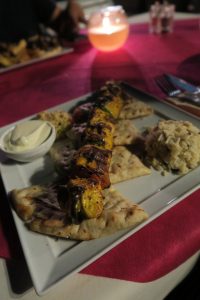 Santorini reminds me of Hawaii. Lots of touristy restaurants and shops. People come here to relax. The heat makes one lazy. The only thing to do is go to a beach somewhere, swim, sleep, eat and watch a sunset. Can’t complain. Oh yeah, gyros are delicious and cheap here. 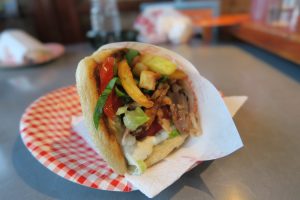 santorini’s beaches: slumming it in the sun