jojo:
what do i like?
-more of a big city feel compared to barcelona
-although probably more in sheer numbers, it feels like a higher ratio of locals:tourists which change the vibe of the neighbourhoods
-more variety for food options that aren’t seafood based; even a simple patatas bravas made me break out in hives for 4 days in barcelona thanks to being fried in the same pan as giant prawns

what do i dislike?
-lack of escalators in train stations.  i was really looking for something to gripe about so that’s my one and only

what do you like/dislike about the new accomodations?
-very cozy!  a huge improvement over our laneway home on the outskirts of barcelona
-great location near main metro stops; madrid is quite small and it doesn’t take long to cover a metro stop or two by foot

-kitchen is very usable, bed is cushy and the shower is smoking hot 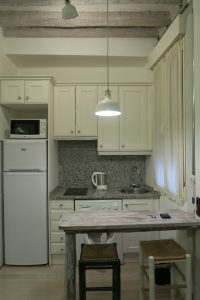 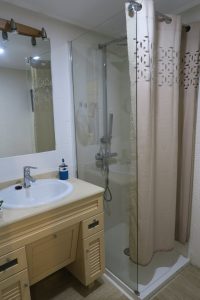 -the only downside is the washing machine which was lazily spinning away all night.  it took 2 hours of fumbling around with it before we finally set it on it’s course to do a complete cycle.  six hours later (at 330am), it was still intermittently churning away at which point haha got out of bed and started pulling the steaming hot clothes out which were drenched in hot water.  some pieces took nearly 3 days to dry :/  still one of the better airbnbs we’ve stayed in since it had everything we needed minus a siesta/washing machine 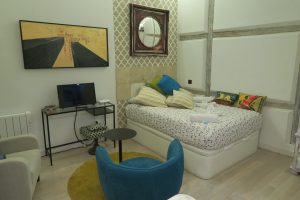 biggest adjustments from the previous stop?
-since we’re planning to eat at home more often, the market hours are taking some getting used to.  most grocery stores close between 9 & 10pm and restaurants don’t even open until about 8pm.  it seems like that’s a lot of time but the hours really fly by once you start making your way around the city

what was our first meal?
-takos al pastor – yeah, yeah… i’ve repeatedly staved off the temptation of tacos this trip as i feel that i’m being unloyal to one of my fav places back home.  after much serious research, this place is 100% mexican run which sat better with my conscience.  it didn’t disappoint in the least.  1 euro per taco was the icing on the cake.

they fry their pastor a bit dry and crisp with a single fat chunk of pineapple to garnish it.  their guac and hot sauce are the perfect toppers too.  oh yeah, the mushrooms with cheese taco… amazeballs.

overall impressions?
-love this city already.  even with similar weather, the city feels like it has a lot to offer.  more little streets to turn around and although there might be more tourists, it feels like they’re more spread out so there’s a more spanish feel to it.  with the exception of names like gaudi, there’s more art and graffiti to be found and many winding streets to find them in.

haha:
what do i like?
Madrid felt more like a European city than a resort town like Barcelona. The streets are wider with lots of patio dining everywhere. The neighbourhood we are staying in by Chueca metro station has lots of restaurants and a nice market close by.

what do i dislike?
The weather continues to be cold and windy. I’ve been struggling to stay warm by layering all my thin summer clothes and wearing them all at once. It did not help that I washed both pairs of pants on the first day and due to the world’s longest cycle washing machine, both were out of commission for 2 days. Only bottom I had was a skirt which I wore with Uniqlo thermals. Great look.

what do you like/dislike about the new accomodations?
The Airbnb unit is in a great location. It felt like we were able to walk to most of the attractions close by or reach by a short metro ride. Being able to cook and eat at home was great as well. It’s a nice change to restaurant food. We finally got some fast wifi, so happy to be able to update our blog. As mentioned previously, the washing machine left much to be desired. Nothing like wringing drenched clothes that are still scalding hot at 3:00am in the morning. Our host also decided to leave half a roll of toilet paper for 2 people over 4 nights. Perhaps Spaniards just go to the bathroom less or don’t clean their bums but half a roll did not last us past the first 24 hours.We managed to find discounted toilet paper at the super market but now we are stuck with more toilet paper than we need for the rest of our stay in Madrid.

biggest adjustments from the previous stop?
The restaurants in Madrid has more tapas style food, lots of small dishes to be had with wine. This is a challenge for me since 1 glass of wine is one glass too much for me. Also, there is a surprising lack of veggie options in the tapas dishes offered. On the plus side, I love all the olives that come with each meal.

what was our first meal?
Tacos. Haven’t had decent tacos since I left Vancouver in January. It was so good!

overall impressions?
Big city with lots of options for food and shopping. I was happy to discover a Primark store which sells clothing at bargain prices. I was able to pick up a cardigan for 8 Euros, much needed to keep warm.