it should be no surprise that after a few months on the road, that our fitness level is sorely lacking.  yes, we tend to walk almost everywhere we need to go however neither of us have broken much of a sweat doing anything active in quite some time, maybe since our hike in hong kong.  and then we arrived in kotor…

as our bus exited the tunnel and made it’s way to the bus terminal by way of the only road in town, one can’t help but to look upwards and marvel at the mountains that surround the tiny bay of kotor.  the town is protected on all but one side by mountains and on the one side that isn’t protected, is exposed to water.  the old town sits at the base of the mountain and behind it you can see a zigzaging pathway on the face of the mountain known as the kotor wall.  we set aside a few hours to make our way up it and opted to do it in the morning so that we didn’t have to deal with the blazing sun. 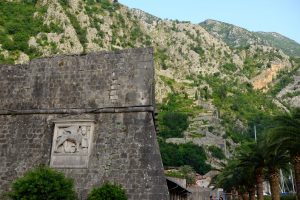 it’s funny how easily great plans can be derailed by laziness.  what started as a ‘be out of the house by 9am’ turned into waking up at 9, leaving at 930-10, stopping for breakfast and then beginning the hike at roughly 11am.  we paid our 3 euro entry fee and began our way to the top.  our schedule was open so the time wasn’t the issue but the heat… today was forecasted to be 35 degrees celsius and by 11am i’d have to guess we were pretty close to that number.  if not at the bottom of the hike, definitely by the top. 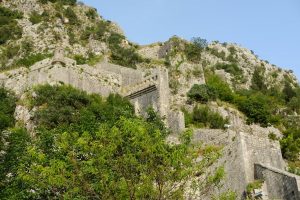 the zigzagging pathway is made up of both steps and a flat/rocky face that was meant for wheeled transportation devices to carry supplies to the top.  the steps are quite small, maybe a little more than a foot in width and depth (not very uniform though so some were twice the size and others were half).  the rocky portion could be walked on as well but since some rocks are loose, we only walked on that when we needed to make way for people as they came the opposite direction.  spraining an ankle looked like it could happen very easily. 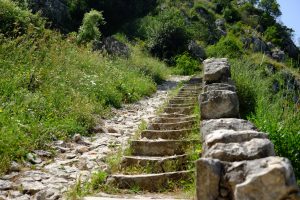 within minutes of our ascent, the sweat started to roll off our foreheads and down our necks.  by 5 minutes in, i looked like i was back in albania at the customs booth.  by 10 minutes in i think i had to get rid of my shirt and i contemplated taking my shorts off as everything was sticking to me.  hong kong people might actually find this hike reminds them a lot of their climate.  with some stops along the way to take pictures of the bay and the rooftops, we made it to the top in about 45 minutes. 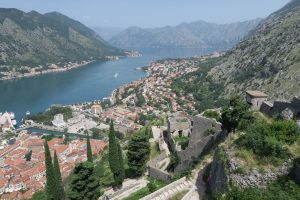 the vantage from the top is amazing.  wide open views of top of the mountains surrounding the bay, the bay itself and the old town which is way down at the base of us.  you can also see the ‘ladder of kotor’, another hike that used to be a military road/transport path in the olden day.  this trail leads all the way to the top of the surrounding peaks which would give an even better view and we were told this takes about 2 hours each way if you’re fast.  also, there’s a likelihood of running into snakes with the warm weather and although the rocky pathway is relatively safe, there isn’t much cover from the sun so you will likely be baking in the heat the whole way up.  i’ve read that a good way to do this portion is to take a car/taxi to the top of the mountain and hike your way down however we didn’t get a chance to do this. 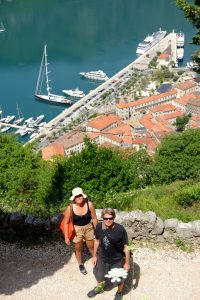 although we were all drenched from head to toe in sweat, there were no regrets.  the hike was less than 2 hours roundtrip with quite a few stops and because it’s pretty much a vertical slog the whole way, it passes very quickly.  good shoes are recommended although i did mine in natives without any socks.  there are some slippery/polished rocks along the pathway so i think that grip is the most important thing as opposed to serious hiking footwear to prevent sprains.  i saw people in flipflops although they seemed to be going at a much slower pace.  oh yeah and whatever season you decide to do this, don’t cheap out on the water.  there are resourceful locals selling drinks along the way at a slight markup if you’ve forgotten your fluids. 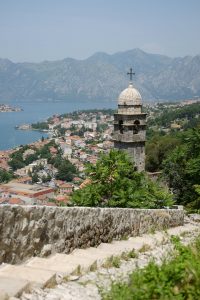 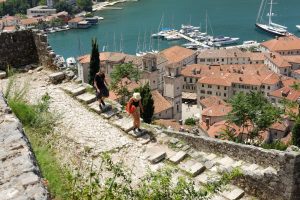 it was late june when we did this hike so if anybody plans to do this hike in july/august, i would think early morning or late afternoon/evening would be the way to do it.  the hike is open from 7am-8pm and costs 3euro during the summer months and is free in the offseason, roughly september/october until april.

hiking the dragon’s back on hk island

2 thoughts on “hiking the kotor wall”