coming off of one heck of a travel day, we got dropped off at our lodging in sarandë in the pouring rain.  with the only things on our minds being to dry off and sleep off our travels, we did just that and by the time we woke up the sun was starting to break through those black clouds that welcomed us to albania. 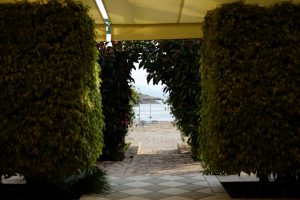 checking in was already a different experience compared to everywhere we’ve been this trip.  the single computer for the hotel was in the dining room area and it powered up with a ‘windows startup error’ screen followed by a windows vista logo, both of which are huge no-nos in the IT world.  i can’t escape the call of the IT gods i guess… this was a clear sign that we’re a long way from kansas 😀

the first glimpse we got was from the balcony connected to our room with three beds.  i’ve never been in a fraternity so this was a pretty exciting stay for me. 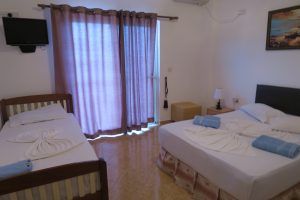 when i was looking up beaches within the sarandë city limits all i found was the one beach in the middle of town along the promenade and we were kind of lukewarm on it.  mucobega hotel was a short five minute drive from the city center and once we woke up from our nap (since we were too tired to look out the window first), we found our own private beach! 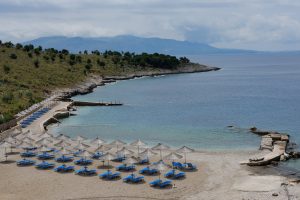 one thing we’ve had to get to get used to coming from asia and portugal are the pebbly beaches of europe which usually require aquasocks.  what you lose in comfort is made up from the water tenfold though.  the ionian sea is so crystal clear that you can see the bottom even in neck deep water.  since i’m a horrible swimmer i didn’t care to venture out much further but the water still looked clear from the jetty.  the waters are also much warmer than the crashing waves from the atlantic sea against the beaches of portugal.

the bohol bee farm from our philippines leg of our trip was the first all inclusive resort that i had stayed in and this had a similar feel however without as many amenities.  being able to order food and sit on a beach in relative silence was a nice change from greece where you’re usually dealing with someone trying to sell you something.  also 700lek ($7 cad) for a litre of wine helps things along.  food costs at the hotel are already about half of what we saw throughout greece which means that restaurants in town will likely be even cheaper.

not only was it private for the beach guests but there were only a handful of guests who were in the hotel at the same time so we more or less had the whole place to ourselves.  one thing we did need to be wary of were sea urchins.  on one side of the water they were literally everywhere however that part of the beach was also fenced off which i assume is because it’s designated for another upcoming hotel… or possibly that it belongs to other residents.  our side did have a fair number of dried up urchin on the pebbles however those were blown in from the storm overnight and they were quickly picked up by the hotel staff once the sun came out.

we spent our first day recovering from travelling and spent the bulk of our second day on the same beach for the better portion of the day.  on the second day we saw a group of local kids hanging out on the jetty and after heading over to take some pictures of them diving into the water, i found myself in the middle of a looting session with me as the storefront.  my camera, phone, sunglasses and shoes were getting pulled and tugged from this mob of albanian kids.  a fun group of rugrats but man can they be mischievous; one kid had signed himself in on some of my phone’s apps and for all i know, installed some form of rootkit in the process.

after haha rescued me from the kids, i brought j as my hired help and before long we found ourselves jumping off the jetty with them.  i’d guess that it was less than a 10 foot drop but when you’re a horrible swimmer, that height feels about 10x higher.  i don’t know how long we spent throwing ourselves into the water but smiles were shared by all. 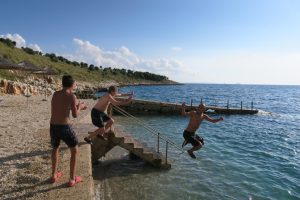 overall we were very happy with the rooms and the staff at mucobega.  it doesn’t have all the trimmings of a western hotel but with the developing infrastructure of albania, i think (and hope) that they will do well as sarandë continues to grow.  having a beach that doesn’t require a 30 minute drive to is a huge incentive though and i would happily stay here again for a few days.

the beaches of the albanian riviera