by this point in our trip (15 days in portugal; albufeira, porto as well as lisbon), we were already smitten by all of portugal’s offerings.  the people, the food, the architecture, the graffiti, the desserts and the beaches.  we heard from nadius that the town and beaches were beautiful so off we went…

cascais is a beach town conveniently located about 30 minutes away from cais de sodre and trains run every 20 minutes during the daytime.  transit to and from cascais was in the 3euro range each way and was quite busy on the way there as there are many popular stops along the waterfront (belem being one of the busiest for the world famous egg tarts, contemporary art museum and belem tower, a unesco heritage site).

our plan was to spend the day along the coastline and the evening in town so once we arrived we rented the free city bikes (bica cascais).  these are located at the nearby park and also at the train terminal though we didn’t see any when we were there.  they are single speed, not the best maintained and don’t come with bike locks so if you’d prefer something a little nicer, newer and faster, there are a few bike rental shops in the city center that rent by the hour or by the day.

coming from a city that’s quite bike friendly, the pathway along the coastline really puts our seawall to shame.  the coastal road is one lane way direction but they’ve allotted enough space for a two-lane bike lane as far as guincho beach but i could see the path continue after we had stopped.  it’s paved, painted, elevated from the road and had very little traffic on it as the pedestrians had a sidewalk on the opposite side of the street.  haha is still getting her feet wet with the idea of riding a bike in populated areas and this ride was very easy to manage.  although the bikes only had one gear and were on the verge of falling apart, they did the job as well.  the few hills that we encountered were long and gradual.

our first stop was the boca do inferno, otherwise known as hell’s mouth.  it got it’s name from the powerful waves that crash along the shore through a break in the cliff.  the resonating noise that the waves make is what brings people to this area.  at least that’s what we were told.  after the fact, we found out that the powerful waves are usually during the winter months.  when we arrived, we witnessed the light ‘slooshing’ sound of the waves barely clearing the rocky coast.  some fishermen were perched along the coast as well as some divers.  we also stocked up on water here for the ungodly price of 3 euro for two tiny bottles.  these are the bottles that cost 15 cents in the markets.  i was sulky about this for a good 15 minutes until we passed a gas station and we stocked up a second time for a fraction of the price.

riding north through the winding roads takes you past a history museum, many resorts, a small town and a couple lighthouses.

if not for the exercise or getting out of the city, this ride/drive is worth it for the view alone.  exposed cliffsides, whitecapped waters with a whole palette of colours everywhere you turn.  the greenery from the grass/trees/bushes, rustic brown fences, the clay-red bike lane, white/grey rocks, rich blue waters and the beaming sun coming down everywhere we were during the middle of the day.  i recall the weather being in the low 30s but thanks to the coastal winds, the temperature was just perfect.  if the winds were any calmer we would’ve been drenched in our egg tart sweat.

about 30 minutes past the boca do inferno we arrived at the beaches of guincho.  there were two to choose from and both looked just as inviting.

our bikes didn’t have locks on them and we found a smaller beach that was more secluded, i think about 10 people on the whole beach.  the waves were very strong, water was cold but in this heat it was perfect.  fine beige/white sand that portugal seems to have an abundance of.

there was also a large sand dune in between both beaches that one could easily spend an hour walking through on the wooden platforms which we would have done had we woken up a few hours earlier.  the catch with the free bike rentals was that they had to be returned by 7pm so we chose to spend our time on the beach instead.  as has been happening more lately, we slept in at the beach and left ourselves half an hour to get the bikes back to the park.  we were definitely late but were fortunate that the attendant told us to be back 30 minutes before they closed; clearly this must happen often enough 🙂  on our walk back to the city center we saw a little sign pointing down an alleyway.

we made a detour, chatted with the manager of the restaurant (that was completely empty) and sat down for dinner.  the cuisine was a french-portuguese fusion and we thoroughly enjoyed it from start to finish. 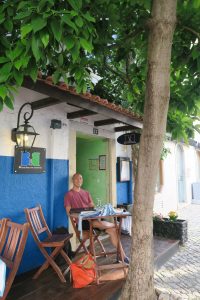 all in all, one of our favourite days in lisbon and possibly even portugal as a whole.  we had actually planned to do our cascais day for the prior two days and slept in both days.  we came within a hair of staying in town and were so glad that we talked ourselves into getting off our lazy butts to visit cascais.  the rest of the day was a bit of a freestyle once we got our bikes and it couldn’t have worked out any better.

we took the train home, stopped by manteigaria for our final two egg tarts of portugal and then walked through rossio to take in our final sights of the city.

we were already considering coming back to portugal towards the end of our trip after the previous week in porto but this day cemented that idea.  dear portugal, thanks for making us fall in love with you again.

daytrip to caparica beach from lisbon