jojo:
what do i like?
-feels like the city (actually, every town we’ve stopped in so far) is very friendly, helpful and generally open to conversation, questions & pictures
-everything is so cheap. saranda was cheap at roughly 600lek ($6 cad) for a pasta dish. tirana has more options and is cheaper by about 10-20% on average
-patio dining everywhere. half the city is out on the streets by 5pm, if not earlier

what do i dislike?
-a much bigger city than saranda, about 10x the population and much more hectic
-poverty is very apparent; many children aren’t shy about coming up to you and asking for money
-lots of tasty food on tap (italian being very popular because of the historical ties between the two countries) but man is all of it salty.

what do i like/dislike about the new accomodations?
-not much to say. this hotel/b&b/hostel is great. freshly renovated (or new, even), comfortable bed, small room with all the amenities we need.

biggest adjustments from the previous stop?
-city life. tirana is the capital of albania and has all the noise, pollution and hecticness that you would expect out of a country’s largest city. much more history here with the communist party being based out of the capital so from the architecture to the monuments to the museums, all of it is new compared to the beach town of saranda

what was our first meal?
-era restaurant. our first traditional albanian meal though this restaurant had a slightly modern twist on their dishes.
vegetable croquettes 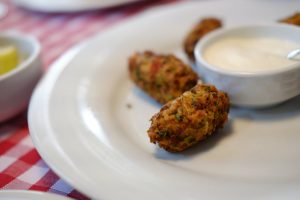 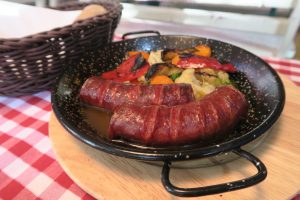 overall impressions?
for a city that has changed a lot over the last 10 years, i’m glad that we were able to make it through here now before the development really takes off. a neighbourhood called blloku is filled with cafeterias, restaurants and bars that look just as modern as any other city so the contrast between the two is interesting. people are very friendly, drivers are crazy and unlike the other areas of europe we’ve been to, this place is cheap. actually i shouldn’t use the word cheap since the food and accomodations are good; the value is unparalleled. i think that only taiwan has offered food of this quality this cheap but the accomodations there were noticeably more expensive. to top it all off, the city has a very casual vibe throughout. even those that are dressed up can be seen eating on a sidewalk patio

You can definitely tell that Tirana is the capital. The area call Blloku reminded me of a mixture of Commercial Drive (lots of trees and coffee shops), Robson Street (fancy cars driving around just cuz) and Yaletown (well dressed people and expensive drinks). Huge coffee culture with lots of local chains. No Starbucks in sight which is refreshing.

The kids begging in the streets. In Sarande, the kids will come up and ask you for money but you get the sense that they have a home and are being fed. They are just being little punks. But in Tirana, it’s a different story. It’s heartbreaking.

The hotel is right next to the bus pick up for our journey to Kotor, a very convenient coincidence. The place is really new and everything actually worked. The shower head didn’t have the strongest pressure (nowhere near Korea) but way better than the measly drips we had in Barcelona.

Had to be more on guard while walking on the streets. My hand was firmly on my shoulder bag the whole time. Maybe I was being paranoid but better safe than sorry.

In Tirana, I had house soup as a starter which was soupy rice with bits of lamb liver. I ordered the rice with lamb innards as my main, expecting tripe or something but instead I got the dry version of my first dish. So I had rice and lamb liver twice. Can’t complain as both versions were delicious.

Tirana is a pretty ugly city, lots of post Communist built concrete buildings. Some ugly ass pyramid monolith in the middle of the city left to deteriorate. There are signs of new construction taking place but I’m not sure if the new buildings are any prettier. We had a drink at the revolving restaurant of the current tallest building in town for the “view”. Meh.

For a European capital city, it’s refreshing to see no big name brand stores in town except Addidas. I noticed a sign for H&M but it was a local shop selling items from the Swedish retailer, likely without their knowledge.

our short but sweet stopover in tirana

One thought on “first 24 hours in tirana”