our last night in porto brought us back to the hood of the cleric’s tower to a small restaurant called casa dos santo antonio.  they specialize in portuguese tapas which are called petiscos.

what intrigued us the most was how the food is ordered.  it actually ‘isn’t’.  you basically sit and await the next dish and the next dish and so on until your stomach is sufficiently stuffed and you let them know that you’re tapping out.  with only cod on the menu for seafood options (afterall, what portuguese restaurant doesn’t serve cod?) we were game.  let the chow down begin…

cheese, presunto (similar to prosciutto) & raisins drizzled in honey.  a standout dish for us

bacalhaus – one of portugal’s staples.  they prepare salted cod in so many ways that even i, as one who doesn’t prefer salted cod, will eat every version 🙂 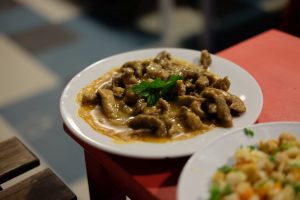 the pork was so savoury that we broke down and ordered rice to go along with it (rice w/ beans was the only type they had.  wish we had white rice!).  it’s really unfortunate that we didn’t have anybody else to share this meal with so we could’ve kept on going but we were already stuffed from these four dishes.  we really liked the randomness of this dining style not to mention that everything was delicious and didn’t break the bank, not that anything in porto is that expensive.  with some wine, our dinner came to just over 20 euro.

the mighty sandwich challenge in porto