another culture shock element for us here… the street hawker.  in asia, the land of enterprising people, selling fake goods seems like a right of passage.  the giant malls (rundown buildings that have been out of maintenance for years) comprised of stalls where you can buy almost anything humanly imaginable from shoes to panties to phone cases to car parts, is jam packed full of asian people selling knockoff goods.

i don’t know why but i’m having a hard time getting over the fact that nigerians and indians are selling the same goods here in spain.  i suppose they’re more adept at hustling, being the outgoing salespeople that they are.  the chinese markets that i’ve been in typically don’t have anyone asking for your business as they’re not interested in you unless you’re interested in them.

the aggressiveness of the hawkers seems to have changed from city to city:

barcelona
hustlers.  always asking if you want whatever they’ve got.  with tourists in every reach of the city, they’re also there on each street corner with their blanket of goods.  head down to barceloneta and they’ll even make you fresh mojitos!

madrid
a little more chill than barcelona.  in the larger squares there are are large congregations of, ahem, coloured folk selling their wares.  when the cops show up, i noticed that they tended to vanish into thin air.  this wasn’t a one-off either.  we had just finished eating our second round of tacos one day and came out to about 15 hawkers with white bags slung over their shoulders.  it looked like an andy warhol version of ethnic santa claus.  for some reason we continued to watch them walk the streets and barely 30 seconds after they disappeared from our line of sight, we saw one run back past us at full speed.  followed by a second and a third and before we knew it, it was a swarm of them.  they reached the end of the block where the roads split and in an instant, their white sacks of fake goods were no longer noticeable.  well, it turns out they were chased by two undercover cops.  nice to see someone taking a stand on this junk but in the end, if people are still willing to pay for this crap, these people will find a way 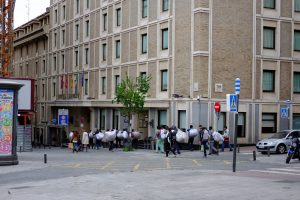 granada
very laid back.  on rainy days they’ll walk around with handfuls of umbrellas for 3euros.  on sunny days, a billboard of sunglasses.  i rarely saw one silicit their wares and on the rainy days, people were walking up to them like they were a convenience store.

the randomness of barceloneta beach

the streets of spain are alive – graffiti love

One thought on “the hawkers of spain”