out of our 5 days in hong kong we spent one of those rain filled days making the daytrip to macau.  we met up with kenny, ethan, frank and karan and took an hour long hydrofoil ride over there.  the last time i visited macau was 5 1/2 years ago and although the macau side wasn’t that different, the taipa side definitely was more developed.  a string of new casinos have gone up and they seem to have taken up the whole western side of taipa.  our time was quite limited to so haha and i sped through most of our day.

our first stop was cafe e nata, famous for their creamy, flakey portuguese egg tarts.  it was plenty wet outside by this point but there were lots of picnic tables available outside.  even though there was a crowd, it was a quick grab and go spot.  it took about 30 seconds to get your food and very few people were there longer than 5 minutes to eat and dash.

next stop was the mater dei, or st paul’s church.  walked along the main pathway to get there in the rain, greeted by lots of people (though less than the previous time i was there).

haha and frank stopped for an innard snack along the way

we caught a shuttle bus to one of the new casinos built on taipa afterwards, studio city.  this thing was grand, had a huge fleet of shuttle busses and most shockingly was like a ghost town.

haha and i were running short on time so we took another shuttle to the edge of taipa city and we all went for another macau staple, the pork chop bun, at tai lei loi kei, a storefront that’s been around for almost 50 years serving up this classic.  you could get the pork chop in either the regular portuguese bun or the pineapple bun, so we got one of each.  if i recall, they were in the range of 50hkd so nearly $8 cad per bun.  a lot more expensive than i recall from my trip here five years ago.  what was surprising though was that the pineapple bun had two pork chops instead of one… score!

we all took our buns to a park nearby and scarfed them down in record time.  even ethan, the healthiest eater this trip, smashed his down in a matter of minutes.

i’ve always liked the look of macau’s tiled sidewalks and alleyways.  looking forward to spending some time in portugal next month for a more complete feel 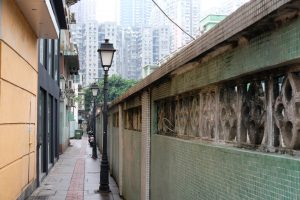 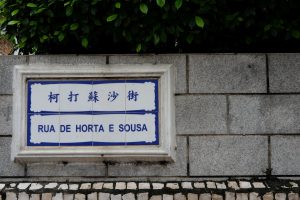 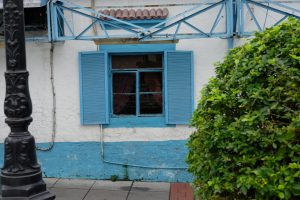 with that done, haha and i caught an early ferry to get home for dinner with my uncle and to pack for our next leg of the trip to the phillipines.

One thought on “quick daytrip to macau”