q. favourite meal
a. gua bao in gonguan.  *drops mic*  in my 10 days in the land of neverending food options, this little bao won my stomach over.  details here: gua bao 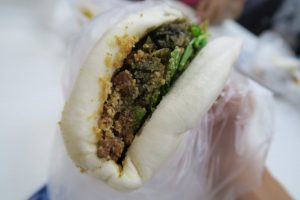 q. most memorable moment / best highlight
a. (going to do away with this question since it’s redundant)

q. greatest challenge
a. saying no to that one more bite, order, bubbletea, dessert, bun or bowl of noodles.  i basically never said no in taiwan; i was eating out of habit and not hunger and it’s been a retardedly hard habit to break over my first three days in hk.  hi, my name is jojo and i have an eating disorder.

q. what i miss most from home
a. spring snowboarding 🙁  sunny april days mean the end of cypress’ season and slushy park days mixed in with pretty reliable dump days at whistler.  i’ve been so content with being a loner from november to may for the last 14 years that this trip is starting to impact my nonexistent social life.

q. next stop
a. phillipines at the end of the week

q. weirdest observation about current culture
a. about hk, everyone loves to move fast even if it’s for no reason.  if you’re dragging your knuckles or moving like a slug, you’re either going to get passed or run down by cars or faster walkers.  our last taxi driver had us locked in for a 15 minute ride but he was cussing multiple people out for slowing him down.

q. one tip i would give myself if i were to come back
a. go on a month long diet before my next trip and limit the number of bubbleteas i can eat based on how much energy i’ve expended throughout the day.  my bubble tea to activity ratio was FAR too high.  i look and feel like a tapioca bubble during a good moment and a slab of grass jelly the rest of the time.

q. friends i’ve hung out with/visitors
a. marsha-san and her hubby, john, our travel companions fraran, the gay-but-sometimes-straight-couple of kenny & ethan and finally my uncle pedro who lives in hk

q. one random/weird/cool thing i learned about the country i’m staying in
a. i figured that taiwan would have stuff happening at all hours of the night considering how late their night markets ran but instead i found it to be oddly quiet after 9pm.  the majority of the restaurants seemed to slow down considerably after 8pm and would be completely empty an hour later.  dessert stands were completely packed by that point but overall it doesn’t seem like the nights go very late there.  i guess the flipside would be that since the breakfast culture is so popular, perhaps that’s why the nights don’t run as late.  i’m not sure about that theory but it’s the best i could come up with other than ‘the town is boring’ which it definitely is not.

q. one new experience/memory that will stick with me
a. our first day in ruifang.  we (frank) booked the unit outside of jiufen because of the limited and expensive options in the more touristy area of jiufen.  we were told that it was a short drive from there so we trained it to riufang and had intended to taxi it to our airbnb.  we flagged a driver down and before long, we had three drivers pointing down the street and saying “it’s there!”.  frank explained again where we were going and they were insistent on the direction.  “go check in to hotel then come back and take your taxi”.  what?  well apparently we booked a place in ruifang without even knowing.  so we go to check in but we can’t figure out the place since the entrance was quite nondescript.  a man walked out from the appliance store next door came out to check on us and we mentioned that we were trying to check into this building, to which he said come on in!  i’m completely confused at this point; i feel like we’ve walked into a well constructed scam between the taxi drivers and this washing machine salesman.  we discuss this further with him and he plays the part so well that since we’re an hour early for our check-in, we decide to leave our bags with this complete stranger while we kill an hour and a half around town.  so we walk down the main road where all the food carts are and noticed an ‘eating market’ sign above a reasonably sized building ahead.  we walk in and see a black pepper bun stand.  score!  we’re hungry but we opt to walk around to scope out the options.  in the back corner of the building we see a small stand with an older couple eating and a man that reminds me of king jaffey jaffar from coming to america.  he’s grumpy looking, has a bluetooth headset dangling from his string necklace and is handmaking a tray of elongated, open-ended gyoza.  this is our cue and the four of us sit down and order gyoza and a seaweed salad.  we add on two beef noodle soups since we see it on the menu.  we had no idea at the time but this turned out to be an award winning dumpling stand, featured in numerous magazines for their pan fried gyoza… and from our first bites we all agreed this was deservedly so.  the beef noodle soup was also a standout.  as a whole, this bowl had thick, uneven & chewy handmade noodles, flavourful but not too heavy broth (without any spice to mask the flavour) and soft, tearable beef shank.  our meal was in the range of $6-8 cad.  the kicker here was that after our two subsequent visits (within less than 36 hours), we found their boiled vegetable dumplings and spicy wonton in dan dan mein sauce were even better than their famous dumplings and that they also make a mean bowl of dan dan mein for only 40nt ($1.80).  oh yeah, and we ended up checking into our airbnb via paying our hosts in cash in the appliance store.  our airbnb units were almost like prison cells with no windows and behind two sets of doors to access the shared hallway.  they were also quite oddly renovated as our unit had mouldings on our ceiling that resembled caesar’s palace while the inside of the bathroom door still had the pricetag and model information sticker attached to it.  as i’m proofreading the above i realize that none of it really ties together but i guess that’s kinda how things go in asia.

q. portion of luggage that’s been the most & least useful
a. my native apollos.  so comfortable, lightweight, perfect for hot weather and good ventilation so that my feet arent moist sponges by the middle of the day.  i also haven’t been able to wear them much until the last little bit of the trip so they’ve packed down very nicely up till this point.  least useful may be my phone’s ability to handle camera and connectivity duties.  i didn’t take the plunge to get sim cards in my last two stops and it’s starting to annoy me; i’ll have to make a point to change this going forward.  the phone is also becoming horribly inept at taking pictures due to slow speeds and cruddy image quality since the lighting on overcast but sunny days is bright enough to throw the white balancing out of wack.  the night shots have always been terrible and the indoor pictures are almost worthless now for some reason.  i’ve got my hands full with all the research i have to do for my full-size camera replacement.

a change of pace

baot it, baot it