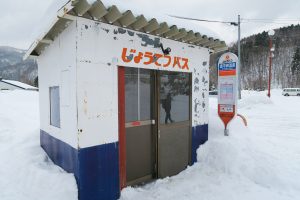 Last Monday we decided to check out Hoheikyo onsen. The main attraction for us was the authentic East Indian food served onsite. Yes, we make all decisions with our stomachs. We get our onsen and bus tickets from the info centre and head over to the main bus station for the 11am Kappa Liner express bus. The bus stop was a bit confusing as there are two other buses No. 7 and No. 8 that could you take there as well but only at certain times. We managed to figure out which line up to join when several groups of people hopped on the other buses only to hop off right away. 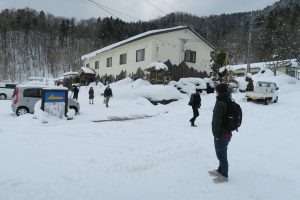 We get off at the very last stop. By then there were only a handful of passengers left. We were a bit taken back to see a very nondescript building in front of us but once we stepped inside, we see that it’s connected to another building. 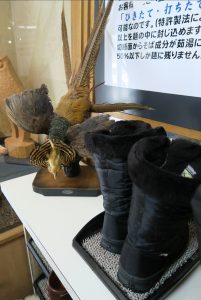 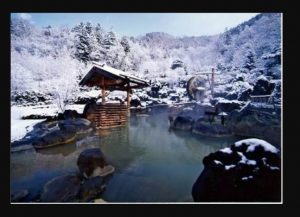 Managed to find a fuzzy picture of the outdoor onsen in winter time. It really was an amazing experience as I lay back in the water, being surrounded by snow covered rocks and trees while watching puffy white clouds move slowly across a crisp blue sky. All’s right with the world!

i somehow managed to skip the onsen while staying at niseko as well as rusutsu.  i read up on hoheikyo and the jozankei hot springs area while back at home so i figured that we would spend at least one day in this area.  jozankei hot springs is a one hour bus ride from sapporo station and there are more than 50 hot spring sources feeding a number of onsen locations within a tightly packed valley.  we picked hoheikyo because of a few reasons:
-size – can accommodate roughly 200 people
-multiple pools – two indoor and 3 open air
-food options – three options for food from their cafeteria: soba, jingisukan & indian

this is the second time i’ve been in a bathing situation where i needed to be fully unclothed amongst other people.  the first time was five years ago in beijing and i was suffering so bad from food poisoning that i couldn’t even enjoy it.  bad.  situation.  all.  around.

anyways, while i can respect the rules and their request for everyone to abide by the same rules, i still don’t understand the need for such a rule.  i’m not bothered by the idea that there could be straying eyes in the baths because people couldn’t care less.  i think i’m more weirded out by the idea that there are people out there that are completely comfortable being naked alongside strangers.  to me, that sounds like it falls into the realm of things you don’t teach your children to do (tangent: then again there are kids who run around naked and this is seen as ‘cute’.  throw a pedophile into the neighborhood and all of a sudden it’s not cute.  nice logic.)

anyways, both haha and myself are starving by the time we get to the onsen so we decide to start with a snack beforehand.  we order a pork rib curry, two naans and a blueberry & honeysuckle juice.  this was heaven.  after a month of the same diet, change is glorious.  these naans weren’t small by any means but we scarfed these suckers down FAST.  i recall some horror stories of people throwing up in bikram’s yoga so we were responsible onseners and gave ourselves plenty of time to digest before we headed upstairs.

the time finally came and i felt like i was walking the plank… into a locker room of asian perverts.  haha and i deposit our items into the lockers and we split up into our respective changing rooms with a plan to meet back outside in an hour.  i walk into the room and the first person i see has no face but two really yellow cheeks staring back at me.  riiiight.  i rip the proverbial bandaid off, throw my clothes into my storage basket and grab my ‘privacy’ towel and make my way to the cleaning area.  this room looks like a giant japanese bathroom but with multiple stools and showerheads for everyone to wash up.  my powers of reasoning tell me that these could be either the cleanest stools in hokkaido or possibly the dirtiest, depending on the showerhead angle.  i opt to break into a vietnamese squat to do my business and then head towards the indoor pool which is right behind me.

only two people are in the pool with towels on top of their head (as you aren’t supposed to leave towels on the side of the baths).  for some reason, this is all i can think of when i look at these guys as i inch into 41 degree celsius water.

ok, this isn’t so weird and the water feels almost silky.  i can get used to this.  after 10 minutes i decide to head to the outdoor pool as it’s getting quite stuffy inside.  unfortunately (and fortunately) i couldn’t bring a camera out with me but the outdoor springs were amazing.  it was huge with two islands in the middle providing some privacy for everyone.  there was even a covered area for shade and a shallow beach-like area for those that wanted to get their tan on.  it wasn’t quite as hot as the indoor pool at 29 degrees but lying next to giant snow banks and watching the clouds zip over the mountaintops wasn’t something i’ve ever done.  not naked, anyways.

now i feel like i have to share my observations of people as the pool got busier.  it seems to be common courtesy to turn away as someone is making their way towards/away from you but sometimes you catch an unintended glimpse… and sometimes there are people that just flat out don’t care.  onsener #1 was noticeably shy when he first got into the pool.  within ten minutes he was standing up and facing away from everyone while he cooled down.  within 15 minutes he was making and throwing snowballs during his cool down routine.  within 20 minutes he looked like jane fonda doing aerobics in a full 360 degree motion.  i think the sodium bicarbonate was getting to his brain.  then there’s onsener #2 who propped himself onto the beach area to lie back and enjoy the -3 degree weather.  he had his privacy towel over his privates but he did have his legs spread in a cowboylike manner.  then there was forgetful onsener #3 who brought his bag of toiletries with him and kept walking back and forth in the onsen, parading himself around in slow motion.

after half an hour i resembled a prune so i sneak my way past onsener #1, mindful to avoid his swinging bat and warmed up in the indoor onsen which now felt like a sauna packed with hot, thick air.  i don’t know if i’ve ever been in a hot tub this long before but i started to get lightheaded so i washed myself off as fast as i could without fainting and then rushed into the changing room.  ok, this would be my major complaint on this whole nekkid business… i’m hot as hell, seeing spots and all i’m holding is my facecloth as my makeshift shorts.  my options to cool down are:
a) sit on bench naked – weird
b) sit on bench naked with hand on tiny towel on my crotch – even weirder
c) stand facing away from everyone naked – odd, especially if i have my hands on the wall while trying to catch my breath
d) stand facing everyone naked – i can’t afford a police record in japan
e) get dressed and either leave or do any of the above

i choose e) except putting on your merino wool tights while your body temperature is spiking isn’t exactly the best of ideas.  i have no shorts and it’s socially unacceptable to walk into the common area with just your towel on so i proceed slowly enough to not heat myself up even more yet fast enough so that if i black out, that i do so in the hallway where i’m not rescued by someone with low hanging fruit.  by some fluke i walk out at the exact same time as haha and i chase her down on my way back to the lounge area.  there’s a few rooms with communal tables for eating and cushions for sitting/napping; i grab a stack of cushions and camp out in a corner until the grey spots go away while she finds a massage chair.

eventually we make our way downstairs for another snack before catching our shuttle back to sapporo.  eggplant tomato curry, tandoori chicken and two more naans.  we’re so relaxed that we eat in near silence while we look at each other with our shiba inu eyes. 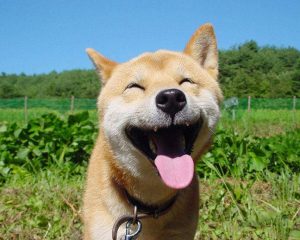 the onsen would normally be 1000 yen for a day pass but sapporo station sells packages including round trip transportation for 1800 yen.  the food was also very reasonable.  our two meals came to roughly 3000 yen.  this isn’t quite the scandinave spa but it’s got plenty of charm and i’d definitely do it again, minus the merino wool tights.

a lazy sunday at sapporo teine