i miss a lot of things from home and at the risk of sounding like an alcoholic, beer is definitely on that list.  i love an icy cold sapporo after a day on the mountain as much as the next person but sometimes you want something with a little bite.  being sapporo and all, macrobrews dominate the japanese market but craft beer is definitely a growing trend in asia 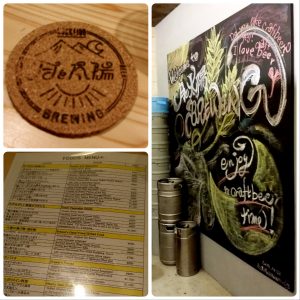 on our first stop through sapporo we stopped by north island beer bar, a local company that brews their beers just outside of sapporo in ebetsu.  just down the street from them and directly next to the nijo fish market is moon and sun craft brewery and bar.  it’s a cold night in sapporo, bordering on -5 degrees and i’m meeting a riding accomplice for a drink.  i’m brutally late thanks to taking two wrong turns and getting lost inside a department store and when i finally arrive, i feel like i’ve walked into brassneck brewery back in vancouver.  the interior is, as haha terms it, rustic hipster. 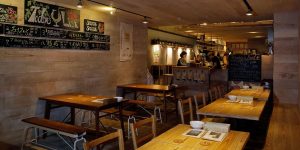 the taps are long and plentiful.  there are no sapporo, asahi or kirin bottles visible.  craft beer is alive and well in sapporo!

i grab a seat at the bar and order the w-ipa.

my go-to beers are ipas and white ipas with the fat tug being the one i buy the most of.  the w-ipa ends up being very similar.  very hoppy, bitter, not quite as sweet but much smoother than what i’d expect out of an ipa.   at 900 yen for an asian-sized-pint (and you thought canadian pints were small?!), i took a little longer than normal to drink this one down 😀  we were sitting at the bar with front row seats to the kitchen/bartending crew doing their thing.  food prices are very reasonable, decent selection and no cover charge unlike many japanese watering holes.  we saw them prep a deep fried chorizo dish but unfortunately we were too full to order any for ourselves.  still, i was salivating over a lot of the dishes they were prepping…  duck breast and avocado salad, a fresh baked focaccia loaf and countless meat and cheese platters.  mmm…

the yakitori sendoff from sapporo

looking back at sapporo