after 5 days of sitting dormant in asahikawa,  the weather finally turned around so I decided to head up to one of the local hills, kamui ski links,  for the day.  from what I’ve read,  there’s some great terrain and the lack of crowds keeps the snow fresh for most of the day.  I figured that conditions wouldn’t be pristine with the mountains getting hammered by torrential rain two days ago so I kept my expectations reasonable.  i hopped across the street to aeon mall to pickup a pair of onigiris for breakfast (which were finally in stock, for once!)

breakfast in hand, I wait for my shuttlebus next door at the asahikawa station.  one by one, the line behind me forms,  slowly extending with each additional European and Australian.  our trip is barely 40 minutes long and we are greeted at kamui with bluebird skies and a nice blanketing of snow,  10cm according to their report but more like 15-20cm.

the day turned out to be prettier to look at than to ride.  every turn seems juicy until you’re leaning into one and then you feel the underlying sheet of ice that was built over the weekend’s rain.  half a foot of snow can and does slide at will.  resorts all over the country,  not just hokkaido,  had the same warm & rainy front roll in with harsh freezing temps and fresh snow fall immediately after and many mountains have closed up their alpine steeps until the avalanche warning subsides.  some mountains have even closed off tree skiing until the snowpack is rebuilt.  the mellower pitches turned out to ride ok today, I found this out after scraping off a huge patch of fresh that sat on a block of ice.  life lessons lol 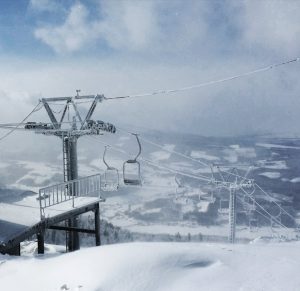 the snow reminded me a lot of what we’d see back home in whistler on a cold day.  not your typical dry hokkaido snow but still dry enough to be unable to make a snowball.  another thing I noticed was that the trees were very different from niseko and rusutsu.  no leaves or needles on any of the trees, snow fully caked onto every branch and tree trunk but the branches have a glazed look about them.  close up they look like blown glass,  possibly because of a thin layer of early season ice thanks to the mountain being relatively low in elevation.  pretty to look at and not as painful to hit as the branches shatter if you happen to inadvertently plow through one or ten. 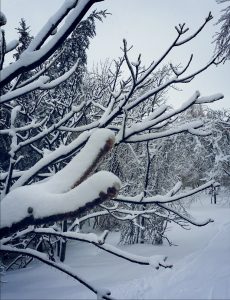 rather than moan and groan about it like some of the people i had run into from our shuttle were doing,  i took this as an opportunity to do so exploring throughout the mountain.  small stashes on the lower half of the mountain, a mini banked slalom course like mount baker where you could really charge the turns was fun for a few runs.  before I knew it,  my 2900 yen five hour pass was almost up and it was time to line up for the shuttle back to the city.

oh, i almost forgot to mention that one thing i’ve now gotten used to is hearing music while on the chairlift .  on most towers, speakers are attached, which i presume is so they can make their safety announcements and also to play all of our favourite hits.  today had a healthy dose of justin bieber’s ‘love yourself’, which caused me to find another chair to ride after a few plays

i’d really like another chance to visit kamui ski links since passes are extremely cheap at only 3100 yen for a full day, but without the back bowl chair running, there’s not quite enough terrain to keep the juices going… and i’d need a crew to make the most of the largest mountain’s side/backcountry terrain in the region, asahidake. i’m looking forward to daytripping it out to furano on thursday and depending how that goes, will decide where we end up next; either back to otaru for kiroro or a few more days in asahikawa.