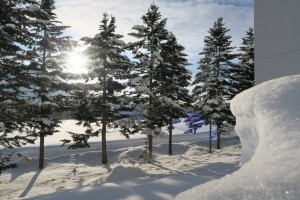 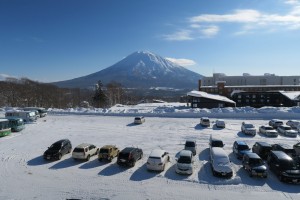 we spent our last full day in hirafu in search of some eateries.  first on the list was rakuichi sobatei, a small soba house in annupurri that was featured on no reservations a while back.  it’s a 12 seat restaurant on the outskirts of the niseko conglomeration and they operate a small lunch service where you can only sit at the noodle bar to watch the handmade soba noodles get prepared.  at least that was the plan… 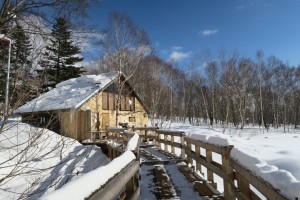 a missed bus stop,  walk down a hill and an hour later,  we arrived…  to a sign that they’re closed for just two days.  nooooo!  so we hoofed it back to hirafu and managed to just barely beat the lunch rush at ramen kazahana.  they’re best known for their spicy miso ramen,  topped with potato foam which makes the broth slightly creamier. 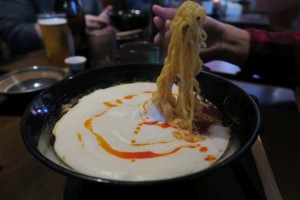 we felt like we deserved a little extra oomph on top so we added a menchi katsu donburi to round out the meal.

at this point i felt like i was on a trip to italy as we waited over 30 minutes for a bus in front of the gentemstick factory to get back home to hirafu.  we eventually bailed on the idea of waiting for the bus and hoofed it back uphill in the snow and of course, halfway to our destination, we see a fully packed bus roar right by us, packed to the hilt with skiers and snowboarders alike.  ack… who couldn’t use a 25 minute walk in the dark while it’s negative 8 degrees?

warmed up to a few beers and then it was off to dinner at rin izakaya, nestled away in the pension village of hirafu.  we walked downhill through a neighborhood of pensions (similar to hostels) and upscale, modern homes while the snow was coming down as heavy as a waterfall but in gigantic, fluffy flakes. 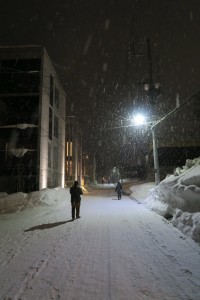 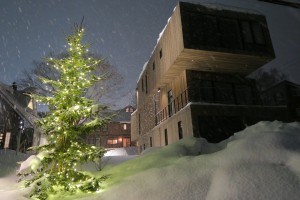 after a 20 minute walk, we’ve arrived at our cozy little home for the next few hours and ate up a storm

with our bellies full of food, chu-his and beer, we stagger back home through the blizzard (forecast said 1cm for today yet again but a good 5-10cm had fallen during dinner alone).  cya niseko, can’t wait to see you again

4 thoughts on “roaming around annupurri, hirafu and stuffing our faces all day”